Corridor lighting is an example of maximizing energy cost savings by dimming LED lighting in unoccupied spaces where lighting must remain ON for safety and security. This is achieved by either incorporating an occupancy sensor into each luminaire or wirelessly connecting multiple luminaires.

Part of a complex of high-rise apartments built in the 1960s, Lincoln Square Two underwent an upgrade of 60 corridor luminaires on six floors. The LRC collaborated with the Albany Housing Authority and Taitem Engineering to replace the linear surface-mounted T8 fluorescent luminaires with LED luminaires (Lamar Lighting) on a one-for-one basis. 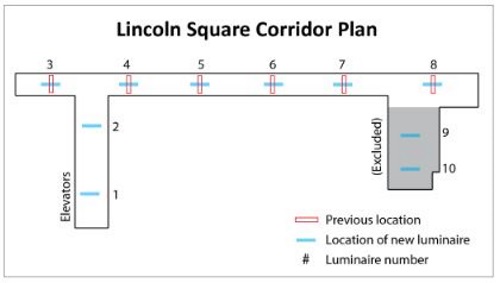 When corridors are occupied, the luminaires operate at full output; when their integral sensors detect vacancy, the luminaires dim to 20 percent of full output, with a resulting light level complying with the life/safety code. The sensor-controlled luminaires were set at a time delay of five, 10, or 15 minutes.

Before/after the upgrade, full-output light levels increased from 10 to about 30 footcandles (fc) at floor level, while the researchers estimated 33 percent energy savings for the LED upgrade alone and 73 percent when combined with sensors with a five-minute time delay, more than doubling energy savings. 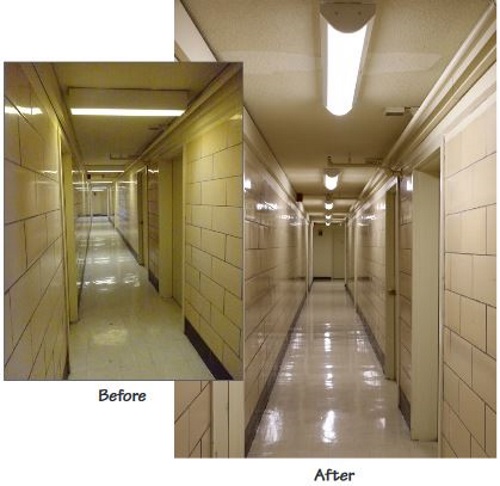 At the five-minute setting, the bilevel LED lighting operated at full output an average 22 percent of the time. This produced an estimated payback of about five years, assuming the integrated sensor and dimming driver added about $100 to the luminaire cost.

Because corridors are public spaces, occupant satisfaction and perception of brightness are important. The LRC issued a questionnaire to occupants. Overall, dimming to 20 percent light output with a five-minute time delay was not objectionable. Satisfaction that light levels were “just right” increased from 74 to 89 percent, and 78 percent expressed satisfaction with the control effect, with one occupant stating, “I like it because it lets you know when someone enters,” and another stating, “I like the way the light dims down, couldn’t ask for more.” Additionally, 78 percent stated the lighting in their corridors was better compared to other multifamily corridors, compared to 42 percent before the upgrade.

“Saving lighting energy in multi-family corridors is becoming more feasible,” says DELTA Program Director Jennifer Brons, who authored the report. “LED luminaires can easily dim light output when corridors are vacant, rather than turning off entirely. Most importantly, the occupants had positive comments about safety and comfort with sensor-controlled, bi-level lighting.”

The LRC report concluded with some guidance for upgrading multifamily building corridor lighting, based on lessons learned from the project:

Replace existing luminaires with sensor-controlled dimmable luminaires. PIR sensors may be appropriate. Consider ultrasonic if corridors turn and block line of sight. The sensors may be integral to the luminaire or remotely mounted.

Even high-trafficked spaces can be suitable for sensor-controlled lighting. While energy savings will be lower in higher-trafficked spaces such as elevator lobbies compared to corridor extremities, the potential for significant savings remains due to periodic slow-downs, particularly late at night.

Consider vacancy light output. The LRC found that dimming to 20 percent was not objectionable to occupants, but cautioned about going lower. Talk to the manufacturer about efficacy at lower light output during bilevel dimming. Ensure the dimmed light level satisfies code requirements related to safe egress.

“As energy codes move toward increased adoption of advanced lighting control technologies, these results show how to use sensor-controlled lighting to improve energy efficiency without occupant dissatisfaction,” said Brons.